It is a warm day here in Ghana. This morning the girls and I went on visitation. Today we had 7 girls show up, because they had a day off of school. It was nice because everyone was home today. Then we looked around the market a little. The Navy gives free boat rides for Independence Day, so tomorrow we as a church are going  for a boat ride. Esther has invited two girls to church, they have come the past 2 weeks and they also where among those who came for visitation. This is the time of year for black berries, ok, not what you think of as black berries. They are more like a seed. You peel off the shell and suck on the fruit inside and then spit out the little seed. They are quite good. A lady gave me some today. Naomi loves these, the season for these last until May. Then we went to visit Cecilia and Evelyn. Cecilia's mom was home and she gave me some Kenkey to take home. Kenkey is a fermented corn dough, wrapped in Plantain or Banana leaves. The taste reminds me of sour dough bread which I love. So Kenkey is not bad. I prefer it over Fufu any day.
http://www.betumi.com/2009/08/recipe-12-kenkey-ghanas-challenge-to.html

Today Ghana is celebrating 55 years of Independence from the UK, they gained their independence in 1957.
Ghana was the first black African country to become independent.

In 1960, Nkrumah declared Ghana a republic and himself president for life in 1964. He banned all opposition parties.
He was deposed in 1966 by a military coup while on a trip to Peking. He later died in exile in Romania in 1972.
There followed a period of unstable government with one coup after another, culminating in 1992 in a referendum on a multiparty system. Flight Lieutenant Jerry Rawlings, who had already led two coups against the government, was elected president.
His supporters credit him with stabilising a turbulent political scene and leaving a legacy of democracy.
He retired in 2000 and President John Kufuor was elected. Ghana was the first black African country to become independent.
Posted by Jackie's Journal at 9:50 AM No comments: 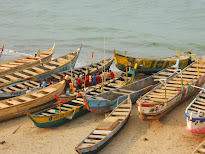